This is the second part of my series about JavaFX architecture and best practice for (business) application. You can find the first part about middleware here.

In this post I will show you a simply and modern way to bind your data model to your view by using Context Dependency Injection (CDI).

CDI is a modern design pattern that is for example part of JEE. By using dependency injection you can remove hard coded dependencies  in your code. Here is a short example:

This is only a very short introduction to CDI. If you want to use it please read a better documentation :)

How a JavaFX application is mostly designed until now

In a normal business application you will have views and workflows. For example you will have a overview of some important business values and a form dialog with CRUD functions.

Normally you will define your views by code or with the Scene Builder. If you use the Scene Builder you can transfer all your UI code into the fxml file and handle the logic inside a controller class. The controller can now access the business data by calling data stores or any other of your classes.

This pattern is good and is working much better that your old Swing code. You have a clean separation between the view and the business logic. But there are still some problems here:

I will try to solve this problems with a new approach of JavaFX client development.

To create a real modern and modular version of this we will do some inversion of control. First of all I don’t like that the controller class for a fxml-view is defined inside the fxml. This is a refactoring killer. Cause if you rename the class or move it to another package this binding is broken. In addition I like it more to define the used view in the controller. Maybe this is not 100% compatible with the MVC pattern where different views can easily share one controller but we can define all dependencies in java code. To inverse this dependency I created a FXMLController annotation:

The internal path to the fxml file is defined by the annotation. By doing so I can simply create a view:

FXMLHelper.create(..) is a Method that I created to do some magic (Don’t be afraid, I will release a code for this design pattern later). The method creates the controller instance and the view and bind them.

We can now easily add the node to our scene graph.

But wait! Where is the controller instance? We don’t have access to this object…

Right, cause we don’t need it :) Cause now comes the CDI magic.

Using the CDI pattern in JavaFX

A first project that shows the use of CDI in JavaFX is afterburner.fx by Adam Bien. With this framework you can easily inject objects in your JavaFX controller. But this framework is very lightweight and don’t support all default CDI features. There are no producers, scopes, etc.

I created a new API that is currently based on Weld (the JEE default implementation for CDI) and provides all the default CDI features. By using it you can use the @Inject annotation in you view controllers:

The model will be injected to your controller as mentioned above. Other CDI Annotations will work, too. Here is an example of a more complex version of a controller:

In this example the model has a custom Qualifier annotation (@ModelQualifier). This will define a special Model type. This type is created by the ModelFactory. The getModel() method has a @Producer annotation that defines this method as a producer for the model class. Additionally the init() method of the controller has a PostConstruct annotation. This method will automatically called once a controller is created.

Putting it all together

After I added the @FXMLController annotation and CDI to my basic application it is really easy to create new views. The UI can be easily created by using the Scene Builder. Once this is done you can create the controller class and use CDI inside it. Cause you can inject everything that is needed it will be very easy to capsulate a view-controller-union as a single module. To create this I only need a line of code (as mentioned above):

The FXMLCDI util class (my custom one) handles all the FXML and CDI stuff. 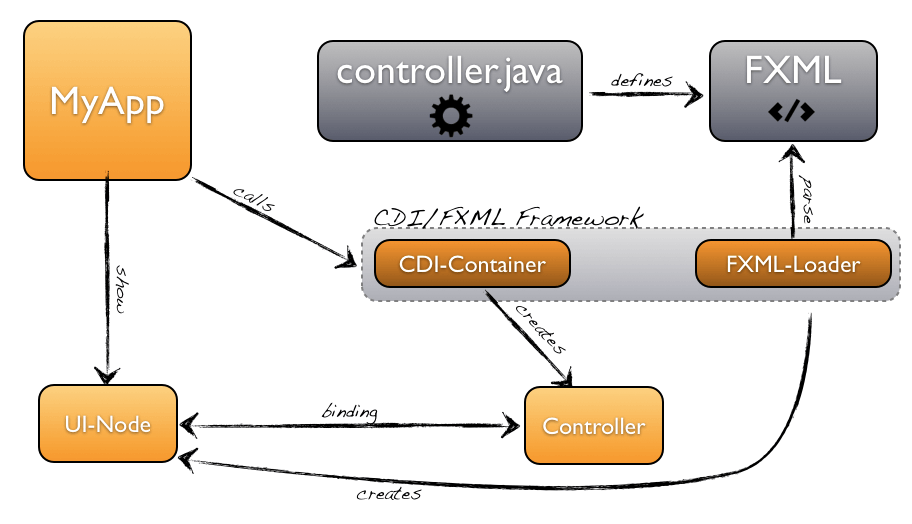 Cause CDI is mostly used in JEE context at the moment most of the Scopes don’t fit to a JFX application. But we will need Scopes here, too.

In the default CDI Scope a new instance of a class is created for every injection. Secondly you can use a singleton scope. By doing so only one instance of the class will be used in your application. All other default scopes are related to web applications (RequestScope, SessionScope, …) and won’t fit in a JavaFX application. While looking at other frameworks I found some interesting scopes that are part of ADF. Here you can use a ViewScope and a ViewFlowScope. I think this scopes are very useful for client applications and one of my next steps is the integration of this scopes in my FXML/CDI Framework.

Let’s think about a dialog with some very important business values. This values should only be accessed by this dialog. But your application offers a twitter integration to post some stuff. The Twitter configuration is defined globally for the whole application. If you want to add a function to twitter the business values by just clicking a button in your dialog the controller could look like this:

And how can I use this stuff?

At the moment my complete code is experimental but I plan to release it once it is more clean. Maybe you have some cool additional ideas for this pattern of JavaFX application development that I can add to the framework before it will be released ;)